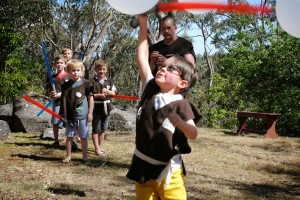 Mums are always on the look-out for ideas for a boy’s birthday party.

Here is a budget-friendly idea for your next boy’s birthday party, a mini Olympics.

The Rio Olympics may be over but it’s not too late to design your own mini Olympics for your boy’s birthday party. You’ll need plenty of space, so if your backyard is small maybe move the party to a park or open space. Somewhere with a playground close by is helpful, then you can incorporate some of the play equipment into your Mini Olympics.

Think about the Olympic events that best lend themselves to be modified for a boys birthday party, then think about the equipment you already have at home. If you have a swimming pool, a pool or table tennis table, your job will be that much easier, but keep in mind that children don’t want to wait too long for a turn, so small numbers in teams works best.

Shooting hoops – get hold of a basketball ring if you don’t already have one and a few basketballs. Start with a couple of minutes for everyone to have a practice, then each team shoots as many hoops as they can in say 2 minutes. Keep it short so other boys waiting don’t get bored and wonder off.

Handball In The circle – draw a circle on a wall away from windows and after a couple of practices then how many footballs land in the circle in 2 minutes.

Relay races – divide each team into two of even numbers if not even someone can go twice. Run to the other end, tag a team member and so on until everyone has had a turn. The possibilities are endless, hop, skip, jump, bounce a ball, walk on hands and feet, and walk backwards.

Leader ball – use a softball, one leader, facing the other team members in a line, throws the ball to the first boy who catches the ball, then runs around the leader, around the back of the line and back to his spot then throws the ball back to the leader then bobs down and so on until everyone’s had a turn.

Three-legged race – not for the faint hearted or young children. In partners, everyone can go together, first past the post gets the points for their team, have the same number of points as teams so everyone gets at least one point. For example, if you have 12 boys, in 6 teams, the winner gets 6 points, 2nd gets 5 and so on until the 6th team over the line gets 1 point.

Sack races – can be done in relays or individually depending on how many sacks you have.  Rubbish bags can work but pillowcases are better.

Have prizes for each event for the winning team, with a bit of luck each team will win something so all the boys will get a prize. Then maybe have a homemade trophy for the overall winning team.

Make sure you have some parents or older siblings to help with set up, counting and retrieving balls and as referees to settle disputes etc., because you will probably be busy in the kitchen!!

Here we have suggested this for a boy’s birthday party, but it can be modified to be enjoyed equally by boys and girls of all ages.