Australian slang earns its place in dictionaries around the world. 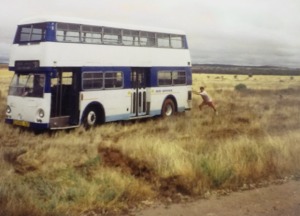 When newly arrived migrants create, invent and blend words we know?they are settling in well. Initially migrants learn existing slang, trying to?decipher what locals are saying;?things their English language teachers forgot to mention, or did not know.

This is not a new thing in Australian society, where we pride ourselves?on egalitarian (everyone?being of equal class or standing in society) values. ?In rural Victoria?we developed a slang we, the only speakers of this tongue,?set ourselves apart by use of the ?Darlimurla Lingo?. Numbering less than?50 people, our childhood ?republic? was doomed from its inception.

Mirriam Websters dictionary ?provides one such example on the Australian outback word for food ? tucker. Not as widely used today as it was in the last century, many still use ?tuckered out? in the context of exhausted. Tuckered out – Exhaust ? often used with out <was all tuckered out after a long day’s work>

It is a saying the GYMBUS party crew use a lot, ?We tucker ?em out and you tucker ?em up!? Simply, a party in an indoor gymnastics play centre that comes to your door burns up kids energy in a fun way. In a single hour, smiling, laughing tired and ?tuckered out? kids are ready for party food and the Birthday Cake to get tuckered up again!

How do you tucker out children at a Birthday Party?